Screenwriting is, like most narrative forms, a complex and difficult art that not only requires a great deal of skill, but a lot of education (traditional or self-taught). It’s no easy task, as we learned while working on our first feature-length movie “Mnemosyne.” Here are six tips to help you in writing your very own screenplay. When starting out, most writers use the same tools: a pen and a notebook. There is nothing quite like the kinetic movement of actually writing that gets an idea out so well. Most people then move onto using software on their computer like Microsoft Word or something comparable. This is where novice scriptwriters can get stuck. As anyone who has ever attempted to write anything requiring complex formatting has learned, Word isn’t exactly user friendly. Constantly shifting your tabs, alignments, and other formatting can be extremely time consuming and can distract you from your writing. That’s why most scriptwriters and playwrights use software like Final Draft. While it does cost money, the software takes care of a lot of the formatting and makes the scriptwriting process a lot simpler. It also tracks characters, scenes, and other properties of your script to create reports and stats on your script. This is a helpful tool because it allows you to determine which characters have the most dialogue and which scene is the longest. But if you are like many aspiring writers, you aren’t sure about putting down that money (or maybe you just don’t have it) and making that investment. Fortunately, there are alternatives out there that can be used for free. What I used before buying Final Draft was a website called Celtx.com. It functions similarly to Final Draft, but is an online tool. The main downside to this site is that although it automatically formats your script, the formatting itself isn’t standard. However, Celtx.com is certainly better than nothing. Unless you’re Stephen King, you probably won’t be able to just write out a compelling story without plotting things out ahead of time. Most professional writers agree that the best place to start out whether you are writing a novel, play, or screenplay is with an outline. 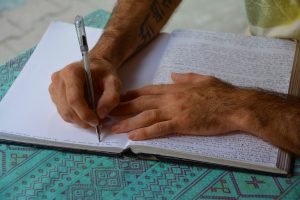 Each medium has its own series of outlining formats, but for screenplays generally you should follow the three-act format. Aim for each act to be about 30-40 pages long (you aren’t Peter Jackson, no one wants to see your three-hour movie). The first act should establish your story: where and when does the story take place? Who are the main characters? What do they want? What is the central conflict, and what is at stake should things go wrong? Your goal for the first act is to make your audience care and hook them in for the next two acts. The second act in most cases is a back and forth between your protagonistic and antagonistic forces, moving the plot along and thickening it. The third act should wrap things up. Usually the third act of a movie is where the major conflict comes to a head, sacrifices are made, and your protagonist’s journey and character arc need to come to a well-thought-out conclusion. There are many different methodologies and theories regarding what each act should accomplish and how to write each of them. They are most certainly all worth reading, but never feel constrained by someone else’s rules as a writer. The best thing you can do as a writer is read up on what other writers say about their craft, learn from them, and when you go against the grain on something, be sure you are making the choice to do so instead of being ignorant of your own decisions. One criticism I remember hearing often from my high school Creative Writing teacher whenever he assigned us a narrative project was that we had a bunch of characters simply floating in a nether world. Characters would say and do things, but because we hadn’t written about where the heck they were, the characters were standing on a white plane of nothing. Before you start delving into your characters and writing your script, you must flesh out the world in which they live. Most people, as it turns out, are infinitely influenced by their surroundings. Someone living in the wilds of Alaska will have a different outlook on life than someone from the heart of Tokyo. Also, someone from Alaska will act differently in Alaska than they will in a big city. A character in his or her element, or out of it, is in that very moment being directly affected by the setting. Beyond the physical world around each character, you need to think about the temporal and societal world in which your character resides. The city of Boston has seen sweeping changes in its culture since its founding almost four hundred years ago, and the people who live there have changed just as much. Consider that Boston, a city founded by English Puritans, is now a city inhabited mostly by Irish Catholics and is one of the most politically progressive places in the country. Assessing the time period, the society, and the place in which your story takes place is extremely important. Without those details, your script will seem hollow—lacking any real substance behind it. When plotting out characters, most writers want to focus on the main characters. This small group usually accounts for most of the time and attention in the script, so it makes sense that the main characters would receive the most attention when a writer starts plotting them out. While I would certainly agree that you should give your main characters a great amount of attention, don’t forget that your minor characters need attention as well. Remember that in this world, everyone has their own life and their own experiences that impact how and why they do things. No one you encounter is an empty shell. We all weave and wind through each other’s lives. So, when your minor characters are well thought out and have some meat to them, it not only enriches your script and makes it more realistic, but it also opens up other opportunities you might have missed. 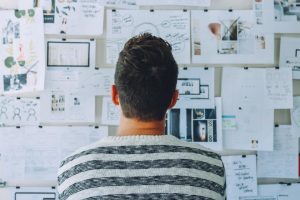 For example, a CASHIER simply doing his job as MAIN CHARACTER hands him money is not nearly as interesting as a CASHIER who just got dumped and is dealing with severe bouts of depression, questioning MAIN CHARACTER about the purpose of money and what life is even about. While this might be the only time CASHIER ever shows up in your script, this is a real moment your MAIN CHARACTER has just walked into and could further MAIN CHARACTER’s story along in a new and unexpected way. One thing that most screenwriters and playwrights, myself included, have trouble with is avoiding writing out things that cannot be experienced by the viewer. So often as a writer, you want to detail a character’s train of thought, explain every emotion, and give detailed backstories to every person or thing. But the fact is, none of that will make it to the screen. How can it be seen or heard? And that’s a question you need to ask yourself all along when writing your screenplay. Another reason to avoid this kind of writing is that when you start to produce your script, you want your actors to be able to come up with their own interpretations, and the director (who you may or may not also be) is responsible for shepherding them to the right place. You will want to think through these details and document them somewhere. Subtext and backstory are important tools for a writer, but you need to be sparing with these details on a screenplay that will be handed to other artists to interpret and make their own. One thing that I especially struggle with as a screenwriter is keeping my dialogue efficient. Too often I err on the side of emulating actual human speech, which in case you haven’t noticed is incredibly inefficient. (Just listen to the number of times any random person says “Um” or “Like” in a sentence, and it will drive you mad.) But in a script, you’ve only got so many pages you can write before you’ve created a monster, and you’ve got a story to tell by George! So, as much as I would love to have ten-page-long scenes where each character in agonizing realism stutters to express why they distrust that orangutan with the sunglasses, doing so gives me ten less pages to write the rest of the story—and we’ve got more sunglass-wearing orangutans to worry about. Efficiency is important because in a screenplay you have a finite number of pages before you go overboard, and the story must always come first. In a screenplay, scenes rarely go over three pages. Keeping your dialogue potent and quick allows you to maximize how much stuff you can put into that scene before moving onto the next scene, where the orangutan takes off his sunglasses and casts a charming smile at his love interest. Hopefully, these tips and guidelines will help you in writing your script. Ultimately, the best thing you can do is to just sit down and do it. You have the tools, you have the knowledge, now go tell your story. I look forward to seeing it on the big screen!