In February of 2016, the creative minds at CATMEDIA began work on one of their biggest feats since the company’s creation in 1997. CEO Catherine Downey and her Creative Team started the company’s Entertainment division with the aim to produce their first full-length feature film. That film is Mnemosyne (Nee-mo-see-nee)–now try repeating that ten times fast. If you follow Mnemosyne on social media, you have probably been able to keep track of the production so far. However, for those of you who haven’t followed the indie film (big mistake, coming from the Mnemosyne social media strategist), I’ll use this blog to explain the process step-by-step, starting with the beginning.

In February 2016, Writer and Director William Warren handed over Mnemosyne, his original 5-act play to CATMEDIA’s creative services team. “The story was actually a combination of two different ideas I had at different times,” William Warren explained. “Years ago I was driving home from Virginia listening to NPR, and I heard a story about scientists who had seemingly implanted memories into some lab rats. And that idea kind of stuck with me for a while as something I wanted to write about. Years passed, and one night I was watching TV and a commercial came on concerning a show about a cult on an island. It looked pretty awful, but I thought—I can do something like that. So I opened up my laptop, and about 10 months later I had a very rough, very long play typed out. Little did I know that three months later I would be working to produce it as a movie.” After approximately seven months, countless script editing meetings, a grand total of ten versions overall, and only a handful of mental breakdowns along the way, the team adapted the original 130 page play into an 80-page movie script that was ready to be produced. However, before production could actually start, there was still a lot of work to be done in preparation for the film. Food and lodging needed to be found, equipment needed to be sourced, and locations needed to be scouted. But most importantly, CATMEDIA’s team was tasked with finding a cast and crew that could take part in the company’s first independent film. Auditions began in early March, and continued for certain characters through the summer. Dean Kostlich, who played the movie’s main antagonist, Pastor, signed onto the role only two weeks before shooting began. Sourcing for crew took equally as long. By the end of Pre-Production, about 50 people were on board. The group that traveled to the location for the shoot, included an ensemble cast of 12 skilled actors, and almost 40 crew members.

After numerous location scouts, CATMEDIA’s creative team decided to shoot its independent film at the Masonic Home Camp in Townsend, GA. Approximately 50 miles south of Savannah, Townsend is home to a mere 6,509 occupants. Unlike Savannah, there is a lack of tourism in Townsend, which has left it fairly uninhabited and made it a great place to shoot. The Masonic Home Camp is abundant in Spanish 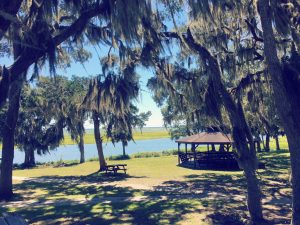 moss and has incredible views of the marsh. The picturesque location proved perfect for shooting Mnemosyne, which takes place on a secluded island in the southeast United States. The Mnemosyne cast and crew was on location at the masonic camp from September 5th through the 17th. Needless to say those 12 days were action packed from start to finish. Here’s a bit of a synopsis of our trip to Townsend. It was a four-hour trip from Atlanta to Townsend. Members of the cast and crew met at CATMEDIA’s headquarters in Atlanta while some of the crew went to pick up the grip truck, carrying most of the camera equipment. And of course, it wouldn’t start. Once the truck finally made it to set, the crew unloaded and set up. Kraig Swisher, the Director of Photography, Wayne Blackburn, the 1st Assistant Director, and William Warren mapped out what the next day’s scenes would look like with the actors before nightfall. Shooting began the next morning, and would last only about two weeks, an ambitious schedule for such a hefty project. Within the first few days on set, the crew survived several 12-hour days, two trips to urgent care, one near death experience when the camp’s dock almost collapsed with half of the cast and crew on it, way too many trips to the nearest Wal-Mart (32 miles from camp), and a much needed stop to one of the town’s three bars. CATMEDIA’s team was on location in Townsend for only ten shoot days. The crew then packed up and drove back to Atlanta where they shot for two more days, and somehow within the span of only a few weeks, they made a movie.

Mnemosyne is a southern-gothic thriller that delves into the world of a mysterious, sequestered commune. It follows the story of Cam, the son of Pastor, the tyrannical, yet charismatic leader of the island. When Cam’s sister Reilly falls ill, he must find a way to get her to safety or watch her die. Together with his friend Hannah, Cam discovers the sinister nature of the island. A harrowing game of memory and manipulation unravels—revealing that things are not always what they seem.

When Can You See Mnemosyne?